Like most people, I like music. Unlike most people, until yesterday, I had never been to a concert before. Symphony concerts, yes. Contemporary music concerts, no (Sort of weird for a person who was raised in the entertainment capitol of the world). For my birthday, my boyfriend, Adam, bought me tickets to go see the country group Emerson Drive. Last night we went to see the concert at the Scera Outdoor Shell in Orem. It was SO fun! The weather was good, the band was good, they played almost all of my favorite songs, and ended with a bang when they sang "The Devil Went Down to Georgia," and the fiddler outdid himself with unbelievably fast and ridiculously amazing fiddling.
Verdict: I like concerts. I like them a lot. 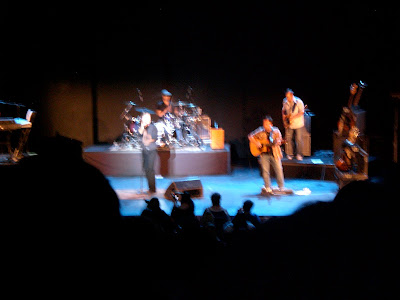 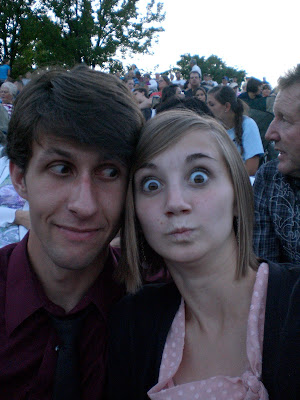 Adam and Me, sharing a non-photogenic moment in the pre-concert excitement.

There comes a certain point in a production where an audience becomes necessary. If you have even been to a preview performance, or opening night of a show, you will understand. There is a level of heightened enthusiasm, the excitement and delight of the first laugh from an audience, the excited murmur from the audience prior to the performance, the hush that comes over the audience as the curtain rises or the lights go dim. Of all the exciting things in live theater, this is perhaps, my favorite. Last night, we at the Utah Shakespearean Festival, had our first preview for Shakespeare's Much Ado about Nothing. With a few small hiccups here and there in the costume department (I was sitting next to the designer, and was privy to all the dresser notes that were taken), the performance was enchanting! It is so gratifying to be see all of your hard work before you and presented in a full and fun manner. It is also completely delightful to see something that I made, onstage, at the Festival! After all, I have been coming to see shows at the festival since 1997... It is rather thrilling to have finally created some of the costumes! 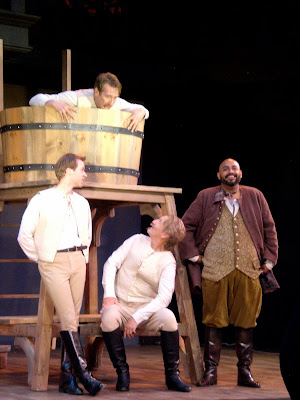 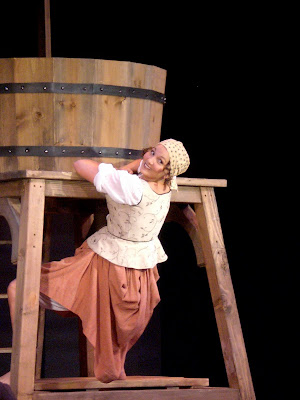 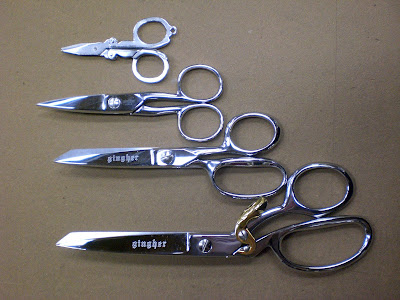 Have you ever seen a sight so beautiful? I now own 4 pairs of shears, and 3 of them are Gingher... I LOVE Gingher shears... They make the most satisfying sound in the world when they cut fabric. You should try them sometime. They could possibly change your life.
Posted by Landen at Wednesday, June 16, 2010 3 comments:

One of the most frightening and exciting parts of the costume design world is that at some point, everything has to be finished, or there is the possibility that actors can walk out without clothes, or at least clothing that fits. For many shows, it is for some sort of publicity photos. The Utah Shakespearean Festival is no different. On Friday, about half of our costumes for Much Ado about Nothing ( the show that I have been working one) have to be completely finished, down to the label being sewn in. On some costumes, this is not a big deal, because the alterations are minimal or simple. For others, however, it means clothing has to be built from scratch and completely finished by this date. Rather daunting, and yet there is something to completely fulfilling about building and finishing projects in such a short period of time. Here are a few samples of things that I have built that will be used in photo call.
Beatrice Bodice: Back view 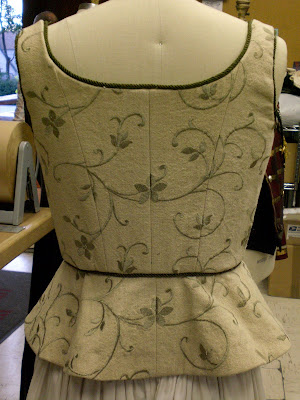 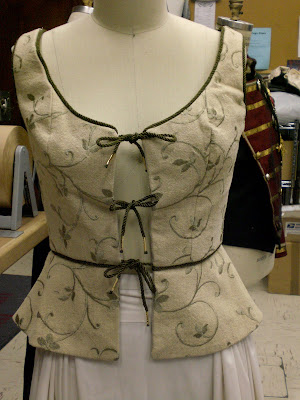 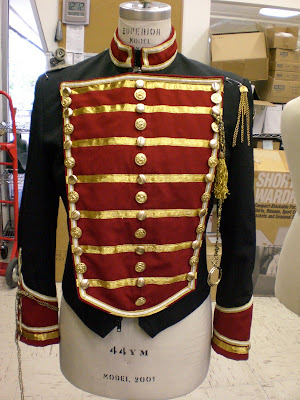 After:) Don't worry, none of the stains or anything is permanent. Any guesses how this was achieved? *As a side note, the designer who originally had this made walked over today to look at it, and was very sad to see that it was so dirty... I was rather thrilled that even he was fooled into thinking that it was permanent and that I had ruined his costume:) * 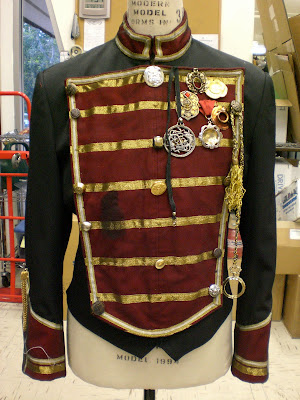 Another watch costume... I like the plastron (large center piece with the buttons)... 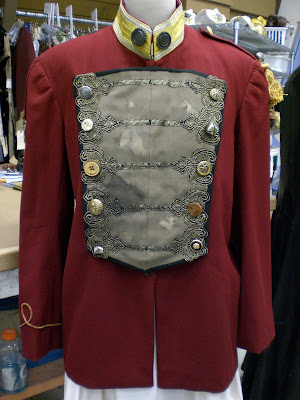 The costume shop at the Utah Shakespearean Festival

Here are pictures of my new home. I spend about 9 hours a day here, and really love the work that goes on here. It can be challenging, stressful and busy, but overall, it has been an amazing experience. I have learned how to do all sorts of things and have now spend about 5 hours at the storage location with beautiful costumes. Life is good! 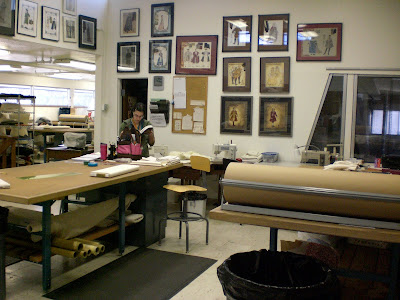 This is the room that I work in with 4 other people. We are the 5 working on Much Ado about Nothing. 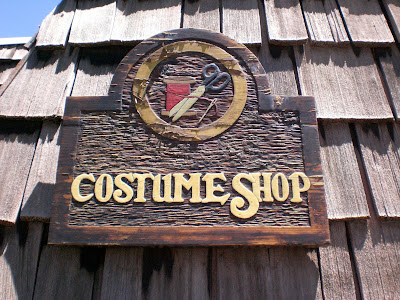 Dear Cedar City,
I like you so much. You have nice big apartments with washing machines and private bathrooms. You have beautiful mountains. You have quaint little shops. You have the Utah Shakespearean Festival and a glorious costume shop. You have nice people who have come from all over the U.S. to make marvelous theater. You have beautiful places to go running. But best of all, you are only 3 hours from the people that I love most in the world.
sincerely,
Landen
Posted by Landen at Friday, May 14, 2010 5 comments:

I have not talked about Costume Designing for a while, (perhaps a few of you appreciated that)but since my personal life is none too interesting right now, I want to return there for a few minutes. Like many professional fields, research plays a huge part in costume design. It tells you what time period you are dealing with, what happened, what influenced clothing, who the important people are, what clothing looked like for certain classes of people ect. In addition to that, the designer has to know what the show is going to look like overall, before the show ever goes up. I am designing an anachronistic (without a time period) show, but because of limited resources, it will probably have a futuristic/stylized contemporary feel... If I can get everything to work out right. But one of the exciting things that I get to do in the field of research, is look through hundreds of magazine images to find the images that will best convey my concept, and then show them to the director in order to be corrected on the points where my research doesn't match up with the feel that the she is creating. Here are a few samples of what I have been doing the past few days: 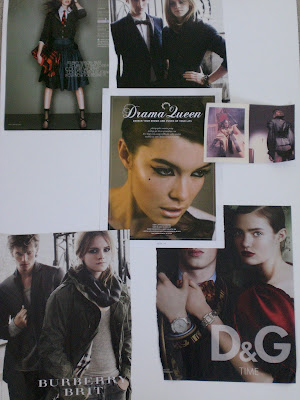 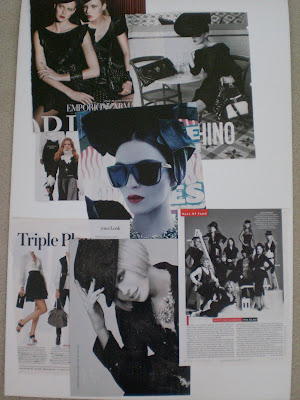 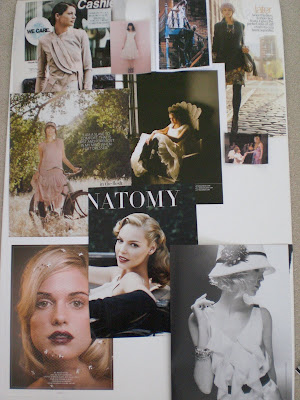